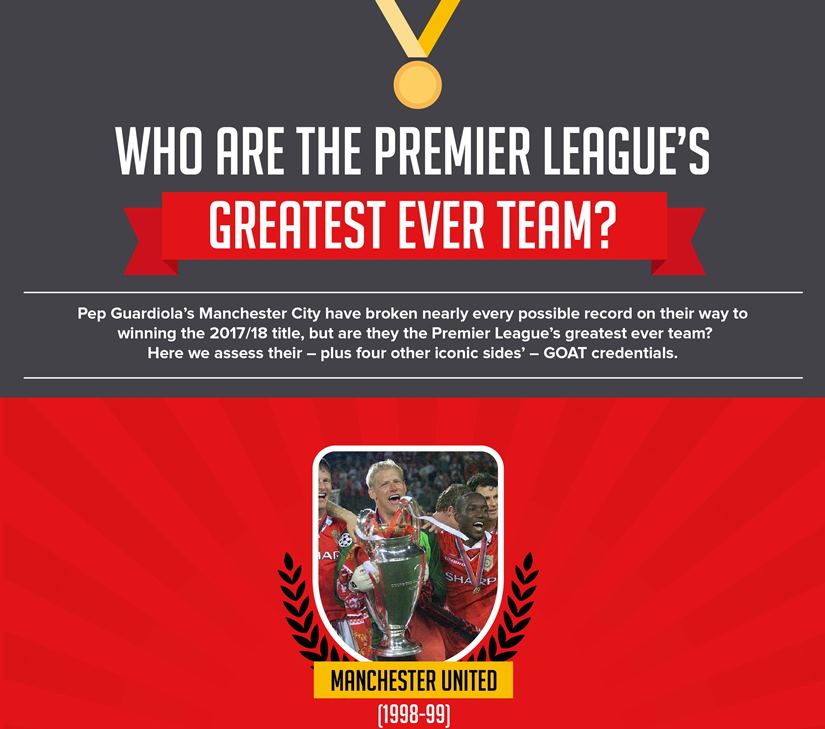 The question, ‘which team is the greatest ever to play in the Premier League?’ has been debated many times over the years. However, the debate reopened in spectacular fashion at the end of the 2017/18 Premier League campaign, as Manchester City swept aside all before them to win the title.

The answer to this question depends on several factors and one of those will undoubtedly be the team you support, with an element of bias being inevitable. For example, fans of Arsenal will argue that the undefeated team of 2003/04 will take some beating. The ‘Invincibles’ are without doubt one of the contenders and were recently featured as one of the five best ever squads to grace the Premier League in this roundtable discussion by Betway.

Arsene Wenger’s team may not have recorded the highest points total in Premier League history or won the Champions League in the same season. However, since the introduction of the Premier League in 1992/93, the Gunners are the only team to have remained unbeaten through the entire league season.

Not only are the class of 2003/04 the only team in Premier League history to remain undefeated, they are also the only team in the English top-flight to go a whole season without losing a league game since the 19th century. That statistic helps to put the achievement in perspective and while the Manchester City team of 2017/18 registered a record Premier League points total, it is the ‘0’ in the games lost column for Arsenal in the 2003/04 league table which remains one of the most remarkable statistics of any Premier League campaign.

But when it comes to looking at statistics to back up the claim of the greatest ever team to play in the Premier League, Manchester City will point to a few of their own. The number of records which Manchester City set during their 2017/18 Premier League title winning campaign is astounding.

Firstly, and perhaps most importantly is the total of number of points won by Manchester City as they became the first team to hit the three-figure mark, amassing 100 points. This broke the previous record of 95 points set by Chelsea.

The one negative element of Manchester City’s season was their performance in the quarter-final of the Champions League against Liverpool. A heavy defeat at Anfield in the first leg left Pep Guardiola’s team with plenty to do at home and this left them open to the counter-attack. They eventually lost the tie 5-1 on aggregate. It was a very disappointing performance across the two games but should not detract from their Premier League accomplishments.

Although the Champions League should not have any sway on which team is the greatest ever to play in the Premier League, it should be noted Arsenal also went out at the quarter-final stage during their undefeated league season. Arsenal lost 3-2 on aggregate to Chelsea that season.

The fact both Arsenal and Manchester City lost to Premier League teams in the Champions League only highlights further what a great achievement it was to win the Premier League whilst setting records in the process.

It was Jose Mourinho’s first season in charge at Stamford Bridge and ‘the special one’ may not have always produced the exciting, free-flowing football we saw from Manchester City in the most recent campaign, but he knew how to set up his team to defend. Chelsea kept 25 clean sheets during the Premier League season and that remains a record which may never be broken.

Chelsea also reached the semi-final of the Champions League in the same season but Liverpool defeated them 1-0 on aggregate to deny Mourinho the opportunity of a league and European Cup double.

One man who has won the Premier League and Champions League in the same season is Sir Alex Ferguson. The Scottish manager produced many Premier League winning Manchester United teams during his long reign at Old Trafford, but the one which perhaps stands out the most is United’s treble winning season.

Manchester United won the Premier League, the Champions League and the FA Cup in the 1998/99 season. It was a fantastic achievement and one which we may never see the likes of again in Premier League history.

However, when it comes to statistics, it depends if Manchester City’s points total plus additional records or Arsenal’s undefeated campaign is what you consider to be the more significant achievement.

Solve that equation and you come close to deciding which team is the greatest ever to play in the Premier League.