We attended the European launch of the 2014 Brazilian National Team Kit, where David Luiz spoke about his passion for Brazil and their iconic ‘Canarinho’ jersey. We wanted to know more about the Brazil shirt and how leading brands are preparing for the World Cup, so we caught up with Nike Football’s Creative Director Martin Lotti, a man behind a massive project.

AFR: The Brazil shirt is arguably Nike’s most iconic international jersey, so when designing the home kit for the World Cup host, what were the most important characteristics that couldn’t be lost, even when creating a new design?

Martin Lotti: We spent a lot of time traveling in Brazil, absorbing the culture, as well as meeting up with athletes. There were two very clear things that stood out the most: 1) the yellow (the colour of the shirt) and 2) the crest.

In fact, several footballers grabbed the crest and said “this what I’m fighting for. This is the heart and soul.”

Just the emotion alone of grabbing the crest showed us that this is an integral part of the jersey. It’s like a painting. And as you begin to get closer to the painting, you start to discover more elements to it, like the ‘Bruno Big’ detail on the back, the unique performance elements or the mesh on the back. But these are intentionally only evident when you look closer. The technology is not the first read.

You don’t design a national flag, you honour it and that was our approach to this jersey: honouring the heritage as well as the country and doing a very proud job.

At the launch event in Rio last week, the Brazil manager Scolari told me, “you know what? There’s only one thing missing.” And I curiously replied, “what is that?” And he said, “the sixth star”.

AFR: Can you walk us through the whole design experience?

ML: We have a whole team based in Amsterdam, which literally designs all our club and national team jerseys. They’re a fantastic team that creates some truly amazing kits. We worked across the board with athlete support, with whom we have a close relationship. In fact, it makes our life as a designer so much easier.

We don’t just take a piece of white paper and say, “what are we going to draw today?” It’s more about how we’re going to make a product newer and better. And then that’s when we start talking to the athletes and cultural icons of Brazil, to make sure we truly capture the spirit of Brazil and also the performance that the athletes are looking for.

Nike has been producing the Brazil national team strip since 1998, so there have obviously been plenty of shirts. Is it possible for you to select one of your personal favourites?

Our 2014 shirt must be my favourite, but the ‘98 shirt is very clean and simple; I really like its simplicity.

But in a typical Nike fashion we see that there is no finish line, we have one eye to the present, but the second eye is really more important, as it looks to the future. What I will honestly tell you is that [my favorite one] is the next one that we haven’t designed yet.

There are less than 200 days until the World Cup, what are your expectations for the tournament?

It’s going to be one of those epic moments. If you think about Brazil, the World Cup, football in Brazil, it really is just epic! I’ve been to Brazil many times and being at the football games over there is just electric. So imagining the World Cup in Brazil is just over the top. Obviously, I hope that Brazil does well, even though I’m Swiss, Brazil is everyone’s second favourite team, so in that respect I think it will be an amazing moment if they do well and lift the trophy.

The World Cup is about country vs country, but Neymar and Cristiano Ronaldo are global icons and Nike athletes. From your perspective, how do you highlight how special they are without overshadowing their teams?

At the end of the day, it’s truly about the nation, as you said. It’s the World Cup. Even the players will say that they’re there to represent their country. We’ve heard it again and again that when a player puts on his jersey, he feels part of his team. That’s the magic of the World Cup.

Has Nike’s focus on sustainability, such as the 18 plastic bottles used to produce the new Brazil shirt, been more of a challenge to overcome or an inspiration for you?

Absolutely inspiration. I think it’s the right thing to do, as a designer just making something look good is not good enough; performance, soul and sustainability is the anchor. 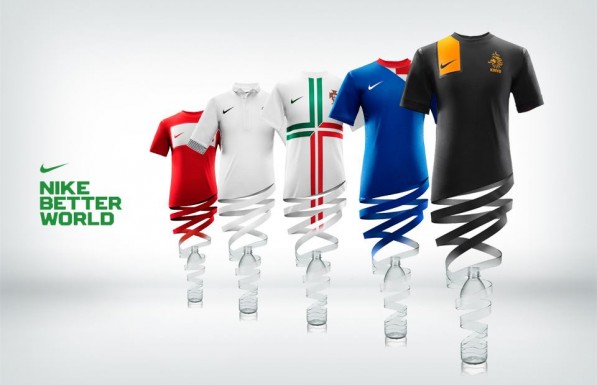 I think it’s the duty of a designer to do the right thing for the environment as well, and we’re very proud to have removed over 2 million plastic bottles since we’ve adopted this technology. It’s an example of high performance and low environmental impact. I think some people still believe that you can’t have both and we’ve shown that you can, without compromise.

You’ve worked in several different departments at Nike. If you had to select one project, which was the most defining of your career?

The 2012 London Games was an unbelievable experience and journey. And then literally two days after it was over, to get the call and be told, “hey - you’ve got the World Cup in Brazil next” is just amazing. The world’s two sporting stages. The largest single sports tournament in the world and the most globally participated tournament… just wow!

It’s truly humbling to be part of those two events, it’s a dream come true. I remember being glued in front of the TV watching Carl Lewis and now I’m having the opportunity to work with him. Or being on stage with Ronaldo last weekend in Rio for the Brazil shirt launch was absolutely unbelievable and humbling.

Where does your inspiration come from?

For me, it’s absorbing yourself into the culture. I really believe that you have to be a sponge, where you go and absorb as much as possible, and then return to Amsterdam or our design studio to squeeze that sponge. Actually being away from the main metropolitan is the ideal escape. It allows us to set trends versus chase trends. Having the opportunity to be in these areas is one of the successes of Nike, allowing us to absorb and reflect, rather than chase.

Inspiration can come from so many different areas and the only rule I have is that if we design a jersey, we’re not allowed to look at another jersey. If we’re designing shoes, we don’t look at another shoe.

Our goal is to challenge the status quo and push things further, and I don’t think that can be done if we just look at the past.

This discussion was between Nike Football’s Creative Director Martin Lotti and A Football Report’s Eric Beard. Comments below please.