In April 1958, Rachid Mekhloufi, the great St. Etienne striker was 21 years old. Mekhloufi along with nine other players, left their careers in France and returned to Tunis to comprise the first FLN squad. They were playing for a country that did not yet exist. Algeria was in the beginnings of an uprising against its’ colonizer France. Their move would be analyzed, critiqued and applauded by many.

“For me personally, the page was turned because I knew I could never play for France or St. Etienne again” - Mekhloufi

Mekhloufi left France and continued to travel and play against other team in North Africa and abroad. France tried to intervene by requesting that FIFA adhere a status of non-recognition to the FLN squad and disallow such matches. FIFA was only able to implement such restrictions in certain countries.

FLN won over 65 matches in four years and their success meant that the silent and powerful gesture of voluntarily leaving Les Blues could not be ignored. Millions in France who supported the players suddenly became aware of the determination of the FNL squad to see an independent Algeria.

But it was also an intense gamble. The situation in Algeria became worse and there were countless deaths and many of the players still had family in France.

The players persevered and were able to delight their fans and their countryfolk. The FLN propelled a campaign of pro-independence through their majesty on the pitch. Without taking up arms they were able to show the highest form of nationalistic pride, using a football. 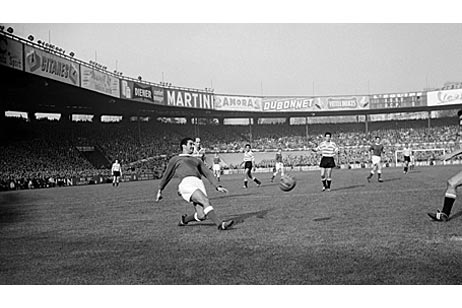 The FLN team continued to play until 1962 when Algeria was officially declared fully independent from France and a National Football programme emerged. Mekhloufi coached the team for three spells and also lead them to their first World Cup appearance in 1982.

The scenes, the pictures and the voices of Rachid Mekhloufi, his teammates and football historians are undeniably powerful. His words remind us that the sport is actually made up of skill, intensity and passion. That passion can be translated into an inherent belief of justice.

In this case Mekhloufi and his teammates decided to act participate in calling for Algeria’s independence through their feet. Their goals, plays and thrilling the crowds are their way of protesting one hundred years French rule in their country and the massacres that following during a vengeful separation.That they chose to wear colours and represent a nation (their land) that was stateless is incredibly brave.

To Rachid Mekhloufi, the FLN experience of wordlessly performing for stadiums full of fans while intensely a supporting the dreams of a nation, while wearing green jerseys and singing what would later become the Algeria’s national anthem “couldn’t have been bought with all the gold in the world.”

The stories of these footballers and activists remind us that football isn’t only about money and fame; it is life at the intersection of current events, proactive participation and football. These men transcended the normal status of footballers to emerge as heroes in the social and political spectrums of their time, often with great risks.

They inspired, delighted and rebelled against the established norms.

The documentaries highlight five football legends whose social conscience led them to use their fame, influence and undeniable athletic talent to challenge unjust regimes, join opposition movements and lead the fight for democracy and human rights in their countries.The first part focuses on the majestic Didier Drogba and how his passion for football and love of his country lead to change in Cote d’Ivoire.

Predrag Pasic (former Yugoslavia), Caszely (Chilea) and Socrates (Brazil) were all featured as men who rose up beyond the game and used football as a vehicle for change, rebellion and expression.

The charismatic and passionate Eric Cantona narrates these stories. He emphatically stresses how Social Justice, humanity and Football are all interlaced.

Of these stories, the tale of Rachid Mekhloufi of Algeria is a brilliant portrayal of how astuteness, loyalty and sport may be used as a vehicle for non-violent political expression. The struggle for Algerian independence went to the pitch.