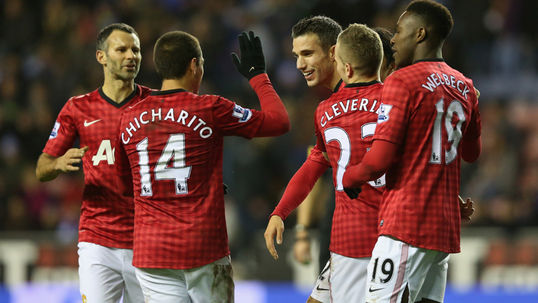 Van Persie scored 10 goals in his last 10 appearances for the Red Devils and despite earning praise from his boss, Ferguson also insisted that the 29-year-old is not United's only threat.

"I don't go along with the idea we have become a one-man team," the 71-year-old boss told United Review.

"There was a time in our history when one man did carry us for a while. Eric Cantona kept us in contention with his goals when a few others were off the boil."

"But things are quite different now. Javier Hernandez has weighed in with 12 goals while Wayne Rooney is currently on nine."

"Two defenders, Johnny Evans and Patrice Evra, have chipped in with eight between them so it doesn't stand up to see us as a one-man band overly dependent on van Persie, brilliant as he has been at both making and taking goals."

"He has a winning mentality, but as he points out, it is one that goes right through the squad and one that will hopefully see us push on in both league and the cups and successfully navigate what is a busy and challenging period."