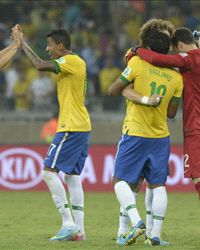 Fifa president Sepp Blatter believes the Confederations Cup in Brazil has been the best ever despite street protests over the past few weeks.

Blatter believes there are positive signs for next years World Cup after two extremely encouraging weeks.

"As the president of Fifa, I have to say that, from an organisational point of view, when it comes to stadia and the football game, I am particularly happy with what has happened here," he told reporters in Brazil.

"We were able to play in six practically brand new stadia and we have received only compliments from the eight participants in this competition.

"On the football pitch, it’s easy to say that it has been the best quality Confederations Cup we have ever organised. The matches were attractive even with a representative of Oceania in Tahiti at a lower standard.

"I have to say it was also a fair competition. There was not one red card and very few yellow cards. I have to compliment the players for presenting to us such a spectacular competition.

"Naturally, the competition has been played in a situation where there was definitely social unrest with protests and manifestations, but I have to say finally that football has played a positive part here.

"Football is going out of this competition with a clear message. Yes, it was a good competition and we are happy to be back here next year in the Fifa World Cup with the 32 teams and 64 matches.

"The Fifa World Cup is an event and I would say it is the world’s greatest single sporting event. When it comes to television audience, it’s greater than any other including the Olympic Games.

"The aim of Fifa is not to take profit out of the country but to put into the country the necessary means and with other actions to make sure that this World Cup is a success.

"We have to work together to have a legacy for this World Cup, not only the stadia but a legacy for the environment and for the social part. For Fifa it is essential to have a successful World Cup because it’s practically the only income of Fifa - 90 to 95 per cent - to develop the game around the world.

"I can understand this social unrest, absolutely. But on the other hand, football at this time brings to the whole continent of 200 million these emotions and hope.

"At the end of South Africa, with all the success of the competition, we left a legacy a special fund of US$100m. I’m sure amounts like that or even higher would be possible here.