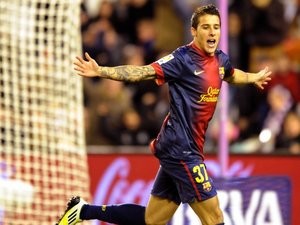 Cristian Tello has signed a deal with Barcelona which will see him at Camp Nou until the end of the 2017-18 season.

The 21-year-old had signed a new contract with the La Liga champions in December last year, but after rumours linking him with the likes of Liverpool and Tottenham in the off-season, the Catalans decided to  to increase his release clause to €25 million.

The promising striker made 34 appearances for Barcelona in all competitions last season, scoring eight goals in the process.

Tello has also represented Spain at various youth levels and is expected to provide cover for new signing Neymar.