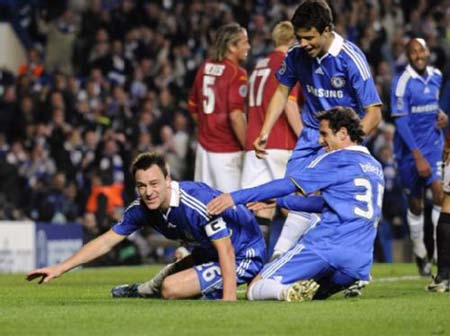 Chelsea scored twice in 13 first half minutes to beat Inter Milan 2-0 in their International Champions Cup clash in Indianapolis.

Jose Mourinho's side will now face off against AC Milan in the semi finals in New York on Sunday after advancing beyond his former side.

Inter came close to taking the lead on the night through Fredy Guarin but his spectacular volley went inches the wrong side of the post.

Just two minutes later Oscar curled the opening goal of the night after a brilliant run from Victor Moses from deep in his own half.

The Nigerian beat two men in an excellent break before laying off for Oscar who controlled beyond his man before curling in a delightful goal.

Moses was again the catalyst for the his sides second drawing a foul inside the area with Eden Hazard stroking the spot kick home.

Replays suggested the foul was just outside the box but the referee waved away protests and it was 2-0 to Chelsea.

The second half was spoiled by a red card for Hugo Campagnaro for a dangerous tackle on Chelsea skipper John Terry with half an hour to play with Inter unable to find any comeback with ten men.