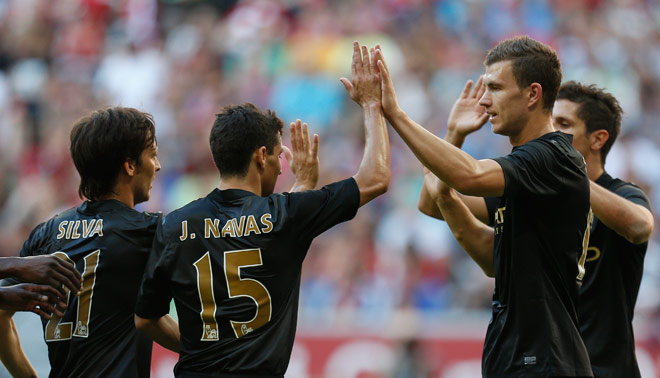 Manchester City have reached the final of the Audi Cup after beating AC Milan 5-3 in an entertaining match in Munich, on Wednesday afternoon.

All eight goals were scored in the first 45 minutes of the game at the Allianz Arena.

David Silva put the Premier League side ahead firing the ball past Milan's goalkeeper early on, before Micah Richards doubled their lead on 21 minutes.

The Rossoneri finally got the wake up call and Stephan El Shaarawy reduced their disadvantage with a low effort, before grabbing a second almost instantly, as he capitalised on some slack defending from Manuel Pellegrini's side.

A thrilling 45 minutes saw its eighth goal go in just before the break, courtesy of Andrea Petagna, who added a third for Milan with a clever flick past Joe Hart.

The second-half was totally different from the first period, with both sides struggling to create too much excitement.

Samir Nasri failed an attempt, shooting wide, while Kevin-Prince Boateng forced a save from Hart.