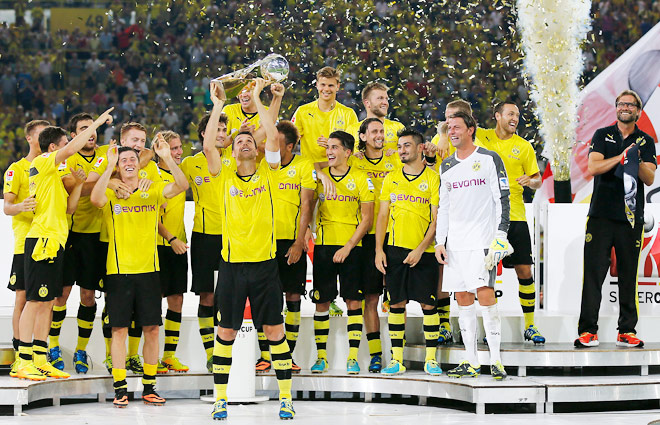 The entertaining match swung dramatically when Dortmund scored two quick fire goals early in the second half to open up a 3-1 lead over Guardiola's Bayern.

Arjen Robben twice pulled his side back into the tie but could do nothing as his side made a series of defensive errors to gift Dortmund two of their four goals.

Ilkay Gündogan scored a sublime third for Dortmund with Reus grabbing the first and last for his side in a deserving victory for Jurgen Klopp's side.

Dortmund took the early lead when Reus headed into the net after a series of calamitous defensive errors from holders Bayern.

Slack defending allowed Lewandowski time and space to cross to the back post and when the ball was headed back across goal second choice keeper Tom Stare dropped the ball into the path of Reus who headed his side bravely into the lead.

Just two minutes later Lewandowski raced clear and finished smartly before seeing his goal ruled out for offside replays suggested it was a poor decision by the official.

Weidenfeller made an excellent double save to keep his side in front to deny first Shaquiri before tipping away the follow up shot as Bayern grew in confidence.

Bayern came inches away from a leveller in the 35th minute when Shaquiri played a deft pass into Alaba whose cross missed the studs of Mandzukic by inches with the goal at the strikers mercy.

Bayern began the second half the stronger and found a deserved equaliser when captain Philipp Lahm crossed superbly for Arjen Robben to head home much to the frustration of Jurgen Klopp.

The Dortmund boss was a happy man just two minutes later when Bayern defender Daniel Van Buyten headed into his own net diverting a Dortmund cross beyond a helpless Stare.

The expressive coach was delighted within another sixty seconds when Ilkay Gündogan broke clear before cutting in from the left and curling a sensational strike in off the post to stun the reigning Bundesliga champions.

Pep Guardiola's stunned side looked to be rocked and were frantically holding on as Dortmund looked to go for a fourth but Bayern managed to hold out and grab a second through the excellent Robben.

Lahm again the provider bursting down the right before squaring for Robben and the Dutchman spun before firing beyond Weidenfeller.

With the match finely balanced Bayern were the more adventurous as they pushed for the equaliser with Thiago Alcantra provided the best opening for Thomas Muller whose volleyed effort was brilliantly saved by Weidenfeller.

With less than ten minutes of the match remaining Dortmund counter attacked at pace and Stare raced off his line to block well from Aubameyang who was played through superbly by Lewandowski.

Stare and Alaba had to be at their best just a minute later to prevent Dortmund from grabbing the all important fourth goal but they were helpless just two minutes later when Aubameyang again released by Lewandowski squared for Reus to tap home for 4-2.