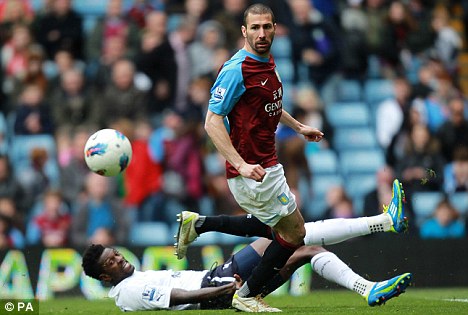 Carlos Cuellar is reportedly leaving Aston Villa at the end of this season, on a free transfer, as his contract is due to expire in the summer.

The Spanish defender wrote a goodbye message to his fans, via Twitter, after his side tied 1-1 with Tottenham, at the weekend.

"Thank you very much for these fantastic 4 years it has been an honour to be part of one of the biggest club, I will miss you forever in my heart," he said.

"Is one of the saddest days thank you to support me everyday I wish you all the best."

Cuellar became a key Aston Villa figure, especially to the fans, since he arrived in August 2008 from Rangers, in a £7.8m transfer deal.

The Birmingham side have virtually secured a continuity in the Premier League campaign after tying with the Spurs, on Sunday.