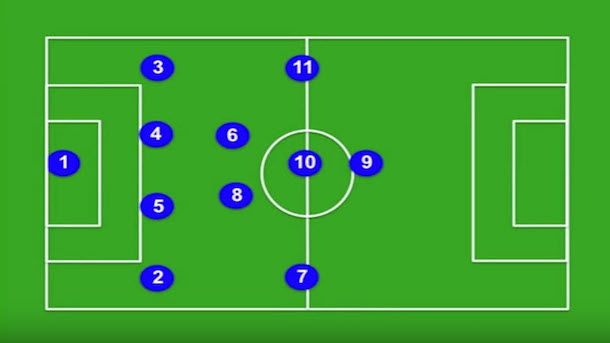 An assessment of the importance of formation in Soccer

Soccer formation (or formation as it’s popularly called) is a broad term used to describe how a team arranges its players on a football pitch and the responsibility given to each of those players. They are available in so many variants which are almost impossible to list exhaustively.

A formation is the tactical structure of every team. It can be fluid, adaptive and changed in the middle of the game based on the team’s need. For instance, a team that is trying to hold up to a particular lead can decide to change an attacking formation to a defensive one.

Most of the time, the Soccer coach has the final say about the type of formation to be used in a game depending on a number of factors which include, but not limited to:

While some managers might prefer to play a particular style of Soccer (for instance, attacking style), the ability of players at their possession might limit them to a defensive or counter-attack style of Soccer.

Some Soccer teams are terrible in some areas like dead-ball situation, maintaining possession and other similar areas of the game. Knowing the opponent’s weakness also shapes the team’s formation.

The style of play of the opponent also shapes the formation a team’s manager will choose. For instance, very few teams can match Barcelona FC in terms of ball possession and midfield control. As a result, most team resort to a counter attack formation when playing against them.

Soccer formations are in different variants depending on the type of game you intend to play. But are they really significant to modern-day games? Well, that depends on who you are asking. Pep Guardiola was once quoted as saying formations are “nothing more than telephone numbers”.

Barcelona FC during her prime years (2006-2012) was known with the 4-3-3 formation. But that formation is hardly followed because the supposed top striker is a false nine who drops down to the midfield. Also, their fullbacks are "7" and "11" in disguise. In summary, all the players are attackers in disguise.

Liverpool FC since the assumption of Jurgen Klopp as the coach has also played a type of Soccer that focuses less on the structure of formation. According to the Liverpool coach, any of the players on the pitch can orchestrate an attack regardless of their designation.

From the above, we could deduce that most teams are beginning to have a fluid system of play that is difficult to classify under a formation especially when going forward. However, the defenders are the only segment of the team that still maintains formation structure.

Soccer is a team sport requiring the joint effort of a minimum of eleven players in order to win a match. To achieve this, each player must understand and implement their role as contained in the team’s formation.For more information about how to utilize knowledge of soccer formations to maximise your winnings, check http://bet2win.com.ng/

Though having the right formation does not necessarily guarantee a win, however, they are more prone to secure a win if the formation is flexible and adaptive to the players’ ability and tailored to capitalize on the opposition team’s weaknesses. Soccer formation if studied properly can improve your accuracy with bets.